Construction Career Is A Growing Opportunity

Medicine might be the first thing that comes to mind when you think of careers in Rochester, Minnesota, but the cranes that dot the downtown skyline pinpoint another growing opportunity that exists in the Med City.

The construction industry is critical to the strength, evolution, and economic vitality of cities like Rochester.  Not only is a career in the trades viable, it is both profitable and desirable.

For decades, school-aged students have been encouraged to apply to four-year universities and seek bachelor’s degrees as the optimal path to success.  Meanwhile, non-traditional but lucrative career opportunities in industries like construction and the skilled trades have been dismissed and, in some cases, even discouraged.

Now – as the average age of workers in the trades tops 43 years of age and labor shortages become inevitable – it’s time to raise awareness about the viability of careers in the construction and building industry and seek ways to shift public perceptions about building a career by working in the trades.
Did you know that job growth in the building industry is projected at over 21 percent by the year 2022?
Did you know that almost 90% of apprentices are employed immediately upon completion of their programs?  Or that their starting wages after graduation are often $50,000 a year or more?
Did you know that the construction industry in Rochester sees over 2,500 new jobs every year?
With over 20 construction projects at various stages of development in downtown alone, the time couldn't be better to consider a future in construction.

Encourage your son or daughter to learn more about career opportunities in building and construction by contacting the Rochester Area Builders today. 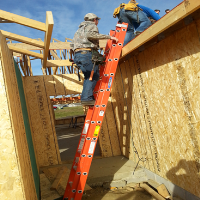